VGP is pleased to welcome Loendersloot Global Logistics as a new customer at VGP Park Roosendaal.

The park is located at business park Borchwerf, close to the important A17 and A58/N268 motorways providing excellent connections to both the north with the south of the country and with Belgium. In addition, the business park is located next to Roosendaal Central Station, which – with one of the main railway connections between the Netherlands and Belgium – makes this area a very important economic hub.

Loendersloot, founded in 1982 and based in Roosendaal, will rent the second building at the VGP park with a floor area of approx. 9,000 m² of warehouse space and an extra 275 m2 for adjacent offices and technical, social and sanitary areas. The company is specialized in logistics, customs and e-commerce services. The first building in the park with a total lettable area of approx. 41,000 m2 has already been occupied by the e-fullfillment specialist Active Ants and the logistics company Raben. With Loendersloot, the park is now fully rented.

Danny De Hoon, COO of Loendersloot Global Logistics, says: „In a more than turbulent time in terms of real estate and its availability, we have succeeded in expanding in Roosendaal. This in close cooperation with De Lobel & Partners and VGP. The development is being realised at the Borchwerf industrial zone, in a more than attractive location in the direct vicinity of Loendersloot Global Logistics‘ other warehouses. With this development we are fulfilling the growth ambitions of Loendersloot and we are very proud of that!”

Geerd van Helden, Commercial Director for VGP Benelux said: „We are pleased to welcome Loendersloot Global Logistics as our new tenant in the park. We are happy to be able to contribute to their positive growth path and the expansion of their Roosendaal campus with this new sustainable BTS project.” 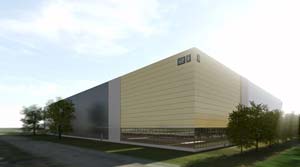 After launching the Benelux in 2018 with the first land acquisition for the Netherlands, VGP has already developed and delivered over 170,000 m2 GLA of warehouses and offices at their VGP Park Roosendaal and VGP Park Nijmegen (Oosterhout Gld.). With this new development at VGP Park Roosendaal, the current constructions at VGP Park Nijmegen with approximately 60,000 m2 GLA and its future development potential, as well as the upcoming park VGP Park Moerdijk, VGP is building tomorrow today. Overall, the Group operates in fourteen European countries. The company based in Antwerp, Belgium, now operates 100 parks.

In addition to state-of-the-art technology, sustainability and energy efficiency are central parameters for the commercial properties developed by VGP. The company is committed to becoming carbon neutral by 2025 and is also engaged in BREEAM and DGNB certifications and green power generation. As a result, 54.3% of the portfolio has already been certified and the green power generation capacity of the VGP Renewable Energy division has been increased to 74.7 MWp, with a further 74.5 MWp in the pipeline. The VGP Foundation, established in 2019, has already identified 29 projects that address social issues, nature conservation and the protection of cultural assets, and has received over €7 million in funding from VGP to date.